Hi everyone, I left you last time as I was uncertain about my holiday plans… Well, they were good ones. I’ll recap below.

On Thursday, after I finished my assignments due, I decided to make it a Broadway night, and went to see “It Shoulda Been You.” On the way to the theater, as I was exiting the subway, I did randomly run into a girl from my hometown that I hadn’t seen since tenth grade… Small world. The show was absolutely hilarious! Tyne Daly plays the perfect Jewish mother (Note: Mom, that will be you in a few years time for sure.) It was so funny and a heartwarming musical comedy about a couple’s wedding day when their families do not approve… But, I absolutely do approve of this show! (You see what I did there?? Okay, back to my tale now…)

The show ended and you know what that means? (Or you follow me on social, which would have spoiled this post for you.) STAGEDOOR! Want to see my photos?

The bride played by talented Broadway actress Sierra Boggess! (She was in Phantom, Little Mermaid, etc)

Lisa Howard who was amazing as the bride’s older sister. 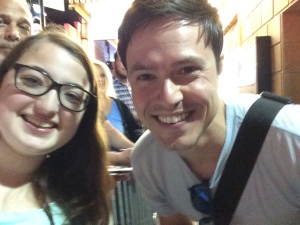 Aaron Finley who played the groom! (He understudied David Burtka in the role and previously starred in Rock of Ages.) 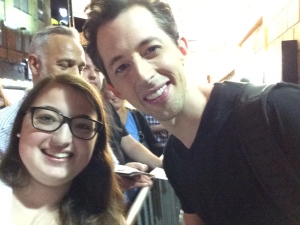 All of the cast signed my playbill! (Except Tyne… she was too exhausted to come out to the stagedoor.)

That was fun! Note, the twist in the show was very unexpected! My jaw nearly dropped to the floor! While at stagedoor, I made a new friend (us theater nerds are pretty friendly while waiting at stagedoors…) who I then walked with to two other stagedoors.

First, we went to Curious Incident of the Dog in the Nighttime and I got autographs from the whole cast (didn’t see the show… yet.) And even a photo:

I met this year’s Tony winner, Alex Sharp! (and he signed the playbill with a smiley face besides his name…)

Off to the next stagedoor: Finding Neverland (sans a playbill). But, oh look, pictures!

Love Teal Wicks’ outfit! (pants from Zara)… And she played Matt Morrison’s wife in the show… 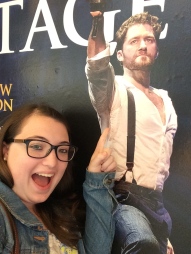 I got home via Uber at midnight and promptly set my alarm for 5:45 a.m. (No work Friday either…) So, Friday I arrived at the theater by a little before 7 and that made me the first in line for rush tickets! Yay!!! So, the box office opened at 10 and I promptly received my front row ticket to “Finding Neverland” for that evening! The show was so incredible! And to see it from right in the front was crazy! I loved it! Can’t wait to get the cast album in a few weeks! I even was a part of the number “Stronger!” So, during that song, there are ropes suspended from the ceiling at the front of the stage and one of the ensemble members (dressed as a pirate) kind of tapped me on the shoulder (pirate-like) like I was in the show with him! Crazy!

My view. Right down in front.

Next up, stagedoor. I got my playbill signed by pretty much all of the cast, and even got to chat with two of the children in the show and Melanie Moore (who played Peter Pan and even won SYTYCD season 8… so naturally we talked about the Stage/Street season going on now… We’re both rooting for Travis Wall’s stage team, obviously!) 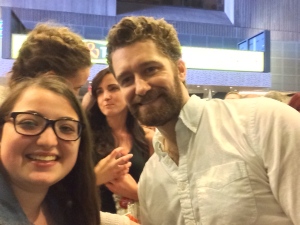 Saturday was the 4th of July! And I decided to celebrate by visiting the stagedoor of Something Rotten at its matinee performance. I got my playbill signed (first autograph/ photo with all the actors!) and even had a short conversation with CHRISTIAN BORLE about how I loved him in Legally Blonde and still listen to the soundtrack all the time, to this day!

Here’s where all my fellow theater nerds fangirl immensely:

That evening my friend and I got dinner at a chocolate shop nearby, and even had to split dessert (when in rome?)

Stuffed from dinner, we decided to go watch the Macy’s Fireworks display. So, we walked down to the East River park for a nice viewing-ish. On our walk there, we made a new friend from Wales; so naturally I told him I was headed to London in the fall… The fireworks, while a bit long, were still very pretty and patriotic! (They even had ones in the shape of smiley faces!)

Sunday morning, my friend and I decided to go put our names in for the Aladdin lottery… we didn’t get it, but still wanted to see a matinee. So, where else did we end up?The Belasco Theater to see Darren Criss in Hedwig!

TKTS gave us pretty good seats, and we were seated at orchestra level: not bad at all! The show was great, as well as seeing Darren live in the flesh with his insane thigh muscles. Loved the show; Darren was incredible! And I’ll definitely be back to stagedoor it, before his run ends…

Until next time, Miranda xx

3 thoughts on “How a theater nerd spends the Fourth weekend…”