So, this past week has been crazy and exciting! Can’t wait to share more; so keep reading! (Oh, the blog title is a reference to something I did this week, will explain later.)

On Wednesday June 17, my day’s task was research-based for an upcoming story. The subject was ‘glamping.’ To which, I learned how intense it can be. (Also, I apologize if you follow me on Pinterest, as I kept pinning glamping ideas… Oops.) Then, we had some surprise visitors come to the office, bringing yummy-but-tiny treats by Baked By Melissa! 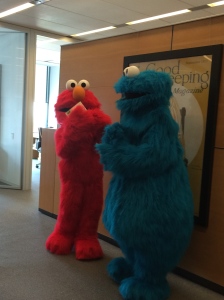 It was none other than Elmo and Cookie Monster!!! (And yes, it was the OFFICIAL ones, not the replications from Times Square.) Our entire office was in a tizzy; haha real celebrities visiting the office! Their PR people from Sesame Place mentioned how it was their 35th birthday, and even gave us promotional flash drives with a picture of Big Bird on it.

Thursday was research day as well (for a different project), and then we took a break to organize the home closet (it is full of adorable home decor!), which was kind of therapeutic for my Type A tendencies. 😉 (The other intern wasn’t as enthralled as I was to organize the closet.) Then, as we went downstairs to lunch, we ended up in the same elevator as our EIC Jane; casual.

Apparently the baseball field? (I’m not well-versed in sports.)

After work I had approximately 20 minutes after my subway arrived to go to the grocery store across the street AND change into something more appropriate for a Yankees game. (Another event for our NYC program participants.) Well, I made it: and my friend and I ended up squished in a Bronx-bound subway car, with just about every other person to the game. Upon arrival, we went to go get dinner (did you know they sell sushi and noodle bowls at Yankee Stadium? I did not.) and find a souvenir for my friend’s relative…. Haha hearing her describe his demographics to the young Mets fan working the booth was priceless! (haha, it was a ‘you had to be there’ type of humor.) Eventually, we found what we were looking for and went to find the staircase to get to the upper levels…. that was a tad bit difficult. We did find it shortly after, and were the last ones of our group to arrive in our seats… and the first ones to leave (hey we stayed until the 5th-6th inning!)

However, I learned that I have no idea what happened. When people cheered, I went “Yay, something happened, I guess!” True story. And we kept trying to guess the what the DH position of A-Rod was… (Is it ‘down home?’ Is that even a thing? Could it be?) It’s Designated Hitter…. ohhhhhhh. We didn’t stay much longer than that, but we couldn’t leave without getting some ice cream in a Yankees souvenir cup. (A.K.A. a souvenir for my brother from the city.)

The next day at work, we did research and then went up to the Test Kitchen to pack up from the week’s food shoot. While packing, I noticed how the GH Institute team was making something; it smelled really good! (Better than my own abilities. Not a joke. I must take after Mom in that way.) Then, when I got home, it was time to sit down to write this monster of an essay assignment due on Saturday. well, actually, I deflected by watching season four of Scandal on Netflix until midnight…

Ready to see Amanda Seyfried live on stage! I wonder, does she still have ESPN or something?

On Saturday, I woke up at 9 a.m. to do laundry and to actually write this paper. To which I learned that no one will wake up before 9 a.m. on a Saturday to do anything. (haha college kids.) I actually wrote this paper all day, and turned it in right on time! Then, it was time to head to the theater! This time I had planned to see off-Broadway play “The Way We Get By” starring Amanda Seyfried and Thomas Sadoski!

The show was fantastic; hilarious and well-done! So, there’s a line in the play where Thomas’ Greg says “Star Wars is awesome,” in relation to his character’s shirt… So, I ran with that for this blog title: I know you all were wondering…

When I sat down in my seat in the small off-broadway theater, I could have sworn that that guy who played Bennett in “The Carrie Diaries” was seated directly behind me… or at least someone who looks exactly like him.

After the show ended, I knew I had to stagedoor, which was in the lobby of the theater. First, Rose Byrne of “Bridesmaids” walked past (She was Helen.) wearing an adorable fedora atop her wavy bob. Us stagedoor folks were excited about seeing her. THEN, Seth Macfarlane speed-walked right past us. (Someone said they spotted him drinking at the bar earlier that night.) With that, let’s get to the actual cast, shall we?

First, Thomas Sadoski came out: who was fabulous as the fast-talking Greg! Oh, and yea, he was the ex-husband in “Wild” with Reese Witherspoon! Then, there was Amanda’s dog Finn waiting to see her post-show. He kept sniffing/licking my leg! (Dogs seem to love me; I can’t figure out why.) And after awhile, Amanda finally came outside (no photos with her were allowed.) And we had a little convo while she signed my Playbill!

Here’s how it went: (Her only conversation while signing autographs, just saying.)

Me: “You were great tonight! And Finn is so cute!”

Amanda Seyfried: “Isn’t he? He’s actually waiting for me in the car!” (Her face lit up when talking about her puppy!)

Me: “Yeah, he actually came inside for a little bit.” 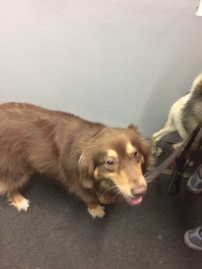 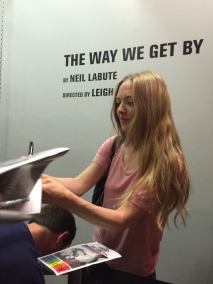 And here’s another [signed] Playbill to add to my collection this summer. (I imagine it will only keep growing…TOTAL TRUTH.)

Until next time, Miranda xx