So, unless you’ve been living under a rock, you’ve heard or been playing the new Pokemon game. Or app? I really have no idea other than that it’s become the fastest/most popular app in the App Store (double the amount of downloads Tinder has) and that you catch virtual Pokemon in the real world. Other than that, I’m clueless. But, in an effort to write more on here– here we go: I’m about to try it. My goal: I just don’t want to lose. (Wait, can you lose this game??)

So, let’s start this adventure. (Disclaimer: I just want to say how I’m probably the least tech-savvy millennial and I haven’t used the phrase ‘Pokemon,’ other than just now, since elementary school. So, yeah, just wanted to throw that out there.)

While it’s downloading, I go to the page description: two unhelpful, un-explanatory pictures, and it just says how you need to find the Pokemon as you walk around your neighborhood. So, basically not being helpful to the non Pokemon-savvy. 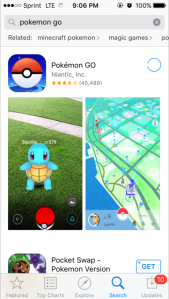 I did a thing… Will I enjoy it? Will I regret it? Only time will tell…

Birthday entered. No clue why. Email logged on. Let’s start this thing, or at least attempt to.

I decided to play leisurely, and not play every time I walk anywhere. (I never was the diehard Pokemon or tech fan.)

When you pull up the app (after staring at the Caution: Be Safe page for a few minutes while it loads), you (or should I say your character as a “Pokemon trainer”) are suddenly thrust into a virtual green landscape surrounded by random blue geometric shapes, with weird pink and green confetti flying out of it. And you wait (or move around) until you find a “wild” Pokemon roaming around– or better put, standing right next to you. When you find something, you must click on it, which brings you to a new screen. 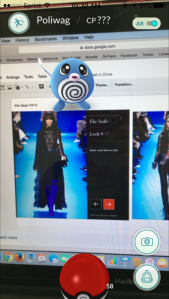 (Me playing while doing research at work)

So, the new screen uses your camera and GPS apps to project the Pokemon into the real world, where you must throw your ball (Pokeball?) at the little guy. (Note: “throw” is a bad choice of words– it’s just a swipe.) And by luck, your swipe will capture the Pokemon or force you to try again.

After capturing about fifteen Pokemon in total, I never felt any thrill of adding to my PokeCollection, like now what? Now, I never passed Level 4 during my one-week experiment, but apparently, at Level 5 you can join a team and go to the gym? (Which people have told me is not really anything special.) So, my thoughts on this game? Meh. Boring. Not fun. Over it.

So, I’ve been playing the new Pokemon game for about a week, and I can honestly say, it’s never been fun whenever I open the app to play.

Come Friday evening, I open the app once I get home, and find Pokemon has logged me out and deleted my progress. So, instead of starting over from a mediocre game (in my opinion), I chose to delete the app and I’ll live in the moment instead of looking for virtual fictional characters through my phone.

I did it– I tried something new, it didn’t go well.

2 thoughts on “A non-tech girl tries something new… Reviewing the new Pokemon app.”

These are a few of my favorite things!! ✨✨
📚Currently Reading 📚
From besties to something more! Today I’m paying homage to some of my favorite friends-to-lovers tropes and stories! 💗💗
Not going to lie: I’ve been in a bit of a reading slump (which has stretched to my bookish plans for this account unfortunately). These slumps are THE WORST because you sometimes really want to read but just can’t pick up that book. Anyone else?