My Saturday night on August 2 was spent in my hometown of St. Louis, Missouri at the OneRepublic concert (who were supported by The Script and American Authors), none of which I had seen before.

(I’m going to be posting pictures from tonight. Please ignore the bad iPhone quality! And with OneRepublic, I ended up running out of storage. Whoops! #iphoneprobs) 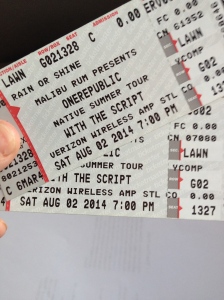 To start off the night, American Authors were first on stage. In fact, upon entering the arena, I heard on the radio they expected to be very “buff” at the show tonight.

American Authors, the Brooklyn-based band, sounded very chill, throughout their entire set. I liked it.

Next, The Script took the stage. Did you all know they hail from the U.K.–more specifically, Dublin? I did not, until they kept saying “litrelly” instead of literally. During the first song, lead singer Danny O’Donoghue ran through the crowd.

Then, they played Breakeven.

After much anticipation from their new album, The Script debuted their NEW single, Superheroes tonight! So good, loved it!

To lead into Nothing, O’Donoghue borrowed a fan’s phone and called her ex-boyfriend to sing him the song. At the end of the song he added, “They’re never ever getting back together.”

O’Donoghue even added they keep coming back to St. Louis because of  [and I quote!] “the good bars and the good hangovers!” I actually laughed out loud at that one.

Next, they played For the First Time. O’Donoghue spent an entire song in the crowd, even approaching where I was sitting in the way back!

They then asked for everyone to light up the stage via their phones and they sang Hall of Fame. They sounded very chill live. Loved it.

Finally, after twenty minutes in between, OneRepublic came on stage.

They played the entire first song behind a giant white sheet, where their shadows alternated, making a cool effect. 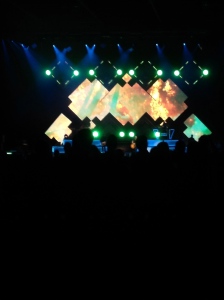 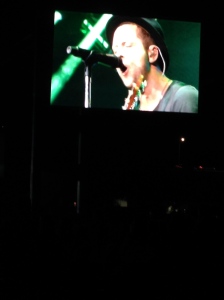 They had plenty of cool video effects, on both the main screen and the smaller screens further away. They then played Secrets.

They then led into All the Right Moves. It was a very chill (which is fast becoming my favorite word for this post it seems) performance, and lead singer Ryan Tedder’s piano solo! Woah, talented. Also, he seems like such a chill dude, based on this performance and the things he said. (Like, “So ominous” and “it’s a pub song” to intro Only Live Once.)

Then, Tedder grabbed one of the cameras filming him, and started to film the fans! How cool.

Tedder, a few songs later, came back out alone, sat at his piano, and played Apologize and then a cover of Stay with Me by Sam Smith, a song I’m loving this month! 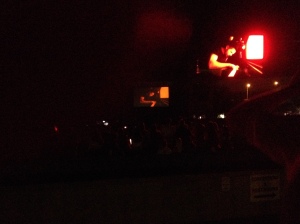 (I ran out of storage here, but it was so pretty!!)

Tedder then adds that he doesn’t “normally write songs about people. But, if you stay true to who you are for 85 years..” Which is how he ended up writing, and performing, a song about his grandfather, the preacher. Oh my gosh, the VOCALS!

OneRepublic should definitely stick to more ballads… To show off their AMAZING vocals more! During a guitar solo, Tedder says, “That was flawless.” Yes, it was. So, was the whole performance.

I think that the little bits of personality a performer adds to the show makes it so much better. Because knowing the band’s having fun, makes the audience have more fun. And with Tedder, they did that.

Talking about writing songs, Tedder said, “If something gives me goosebumps, I operate on the assumption that others will get them. [And that’s what he writes.]… That’s how Kesha confused me,” he adds with a laugh.

He then adds, “Can you help me out? I have no idea what I’m doing. As usual.” Clearly meant as a joke, it segued them into Counting Stars, the big hit of early summer.

He said some funny lines about being in St. Louis for prior gigs playing less than 100 people, but it’s very much an inside joke to St. Louis, so I won’t repeat it here.

Then, it was his son Copeland’s fourth birthday, so he asked us to wish him a happy birthday for him. Awww. Then he plays I Lived, which he wrote for his son.

“Thanks for hanging with us St. Louis,” Tedder says. (Sings) “Beautiful.”

For the encore, they sang Love Runs Out, a cover of What a Wonderful World to which Tedder said, “I wish I wrote this song!” and If I Lose Myself. He then realizes he was supposed to get us to sing happy birthday to his son. So, he goes to record it and adds, “Will you help me be the coolest dad ever?” and then, “Do we have enough battery? Because that would suck.” Rest assured, there was plenty of storage available, unlike my phone.

I think it would be so much fun to be a journalist on tour with an artist! Another thing to add the journalism career wish list of mine.

Tedder has some great vocals! I was pleasantly surprised, because you can’t hear those types of pipes on the radio—it doesn’t do his range justice.

At the end he said, “This is ‘If I Lose Myself.’ Stay around for three and a half more minutes. I promise it won’t suck!” Lol.

Great show. For someone unaware of most of the music from these artists, I enjoyed it.