Hi everyone! It’s been a crazy, hectic fall semester full of homework, keeping up with the election news (ugh, so overwhelming), job applications and my senior seminar research study, which is why I haven’t posted as much. But, I’m back now! Yay! (I choose to believe you, my loyal readers, are just as thrilled to be reading this as I am to get to write this.)

With the fall season, in between the serious news and workload, there’s been plenty of new pop culture to immerse oneself in.

As of this past Sunday, November 6, I began binge-watching the latest Netflix original series, titled “The Crown” and chronicling the early days of the marriage of Queen Elizabeth II (Claire Foy) and Prince Philip (Matt Smith). May I just say, in my opinion, it is one of the best dramatic series that Netflix has created. It very much resembles the British shows that I became so fond of last year while I was abroad. While I’m only four episodes in (no spoilers please!), I’ve become hooked, as the storytelling is well-done at expressing the Royal Family “as Kardashians,” as the stars jokingly referred to it during talk shows and press interviews. Now enjoy some of my random thoughts that crossed my mind while watching:

2. Netflix’s acquisition of one of my favorite BBC shows, “Doctor Foster.” 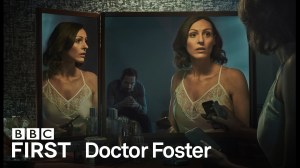 While abroad in London (one year ago *insert sobs here*) and taking classes in British media, I began watching a new series called “Doctor Foster,” a five-part story of British GP Gemma Foster living a happily married life as a wife and mum until discovering a single blonde hair on her husband Simon’s scarf. The show tells the story of a woman finding out about her husband’s infidelity and the lengths she goes to find the truth. Such a powerful story courtesy of the Beeb, and I truly recommend you all to watch it. Truly brilliant, and it’s such a shame it is a British show because I have absolutely no clue how I’ll be able to watch the second series (now filming) when it starts airing.

Upon the release of H&M’s latest designer collab (remember how genius the Balmain one was a year ago??) with Kenzo, I immediately went to the lookbook and was instantly obsessed. Knowing I couldn’t get it all because most of it was sold out was sad, but I chose an adorable off-the-shoulder printed floral blouse and I cannot wait for it to arrive later this week, because I have already planned outfits around it. (Too much?)

Created by Broadway’s Princess Jasmine (Courtney Reed), a new business venture has emerged and created handmade, unique chokers for the cool girls. And they made a Broadway collection. Seemed like a no-brainer to me. After careful consideration of what was in stock and various styles, I chose the Memory choker: a leopard-print (alternating with a plain gold) choker inspired and named from the Broadway revival of “Cats.” It was the appropriate mix of edgy, trendy and cute, and once again I have outfits planned well in advance to match. (Is that too much?)

I just started this weekend “The Magnolia Story” of Chip and Joanna Gaines from the HGTV hit “Fixer Upper.” While I’m only on chapter one and two, I’ve instantly become transfixed by the humor and cuteness of real-life home decor couple Chip and Joanna Gaines. I start thinking, “Aww! They are so cute!! ❤ *melting into a pile on the floor*)

The one thing that can always calm me down after a stressful day: HGTV. Watching any HGTV show never fails to calm down my nervous energy brought on by the amount of stress I’ve been feeling as a senior in my last semester of college ever. So, sometimes it helps to calm down and de-stress, which this blog is also helping.

Ever since binging the first episode, I was hooked on this new show (which clearly the rest of the world was too, as it was picked up for a full season hours after the pilot aired.) It’s so well-written and does such a great job at telling human stories, interwoven with the perfect sprinkle of humor. The one downer: I. CAN’T. STOP. SOBBING. Literally, this show has (on average) reduced to me to tears at least twice an episode. The only show where my emotions can play tennis, and alternate between laughing and ugly crying every few minutes. Kleenex, you should get on this– I smell a perfect corporate sponsorship opportunity here.

I know Directioners, this may seem like a tragedy that the day long feared as arrived— the 1D boys’ solo projects. Which for me, signifies the end to a 1D era. But, Horan’s debut single is so different, but I love it. More reminiscent of Ed Sheeran’s ballads, it’s so beautiful and I love listening to it… Sometimes on repeat. (No judgment, please.) 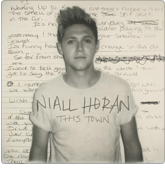 Shortly after Horan’s single another UK-based single was released, this time X Factor winning girl band Little Mix. And while you immediately start debating whether or not this was meant as member Perrie’s ex (and 1D’s ex-member) Zayn and his rather quick turnaround of a relationship with model Gigi Hadid, I’m over here jamming out this smash hit. So fun, and pure Little Mix, which is perfect, rumors aside of who it is based on with the title “shout out to my ex.” 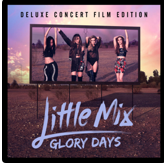 10. I’d be crazy if I didn’t include the upcoming Netflix “Gilmore Girls” revival…

Yes, I am so excited to see where literally every character from my favorite adolescent television show has ended up. And before you even ask what team I am— I’m Team Right Guy at the Right Time for Rory! (They were all great prospects for the time they were together, I think everyone can agree on that.)

Those are some of my obsessions this fall season! Go check them out yourself, and let me know your thoughts!

And make sure to VOTE tomorrow! Whatever side you choose, remember that it’s YOUR voice and you have the chance to make YOUR voice heard and count, because everyone’s voice matters.

📚Currently Reading📚
…And yet another year has come to an end, and with that, so has another TBR log and reading goal. In my case, that means surpassing my January-set intentions by a fairly decent margin, chock full of books across a variety of genres that completely enthralled, shocked and amused me as a reader. No matter what ~ish~ I had gone through over the course of the past year, I had these books to keep me company and fill up my days!
📚Closing out my 2021 TBR with a bang! 📚
It may be wintertime but I’m over here yearning for warm weather and sun-filled vacay thanks to my #CurrentRead!