My Tuesday has been insane, so I wanted to share it with you!

First, I went to an afternoon tea cooking class and had yummy treats galore.m That lasted from 10am until 2pm. I caught the Tube home, ran inside, dropped off my doggy bag of leftover cake, scones and pastries and left again to attend something I saw advertised in today’s Metro newspaper…The Danish Girl movie premiere at Leicester Square. (For those who don’t know, Leicester Square’s Odeon Cinema has long been home to some of the biggest film premieres in the country and the city of London.)

I walk up the the sidewalk, all barricaded up for the fans and covered in movie posters, and take my place ready to see the stars… two and a half hours early.

At 5pm, they started setting up the carpet, to cover the wide span of ground, which included several carpets. Here’s a behind-the-scenes look: 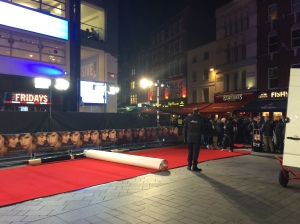 All that press for me?!?

We wait. And wait. And then, one of the first arrivals? Academy Award Winner Eddie Redmayne, in a gorgeous tailored-to-perfection tartan suit, with his better half not far away from his side.

First, he signed a few papers in different sections and one group selfie about three people down from me. Then, he was ushered to the press pen for some photos. (Side note: wow, the what-seems-like millions of camera flashes are very blinding. Gave me a bit of a headache just looking straight ahead.)

But, always by side in  the photos? Wife Hannah… *Insert collective awww here*

Mr & Mrs Redmayne sneak in a word amidst the craziness of the film premiere’s red carpet.

“Call the Midwife” star and Elsa in “The Danish Girl,” Emerald Fennell poses for the camera. Love her dress and all the little beaded elements!

Actor Matthias Schoenaerts from the film smiles for the press.

After press photos, Eddie worked his way backwards and came towards my section once again. (Cue my inner fangirl here.)

He shakes the girl’s hand beside me.

He walks right to me, grabs his Sharpie, looks in my eyes as he signs my notebook. I go to speak and get a bit tongue-tied: a series of incoherent noises squeak out, then I quickly blurt out “Great job” as he’s ushered away to continue the press line.

Then, I get an autograph!

Star Alicia Vikanders arrives and poses for the cameras at The Danish Girl UK premiere.

The stars pose together for the ultimate PR-requested shot: 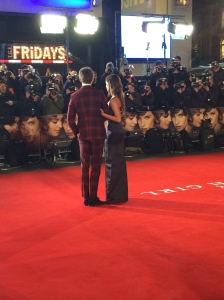 Everyone moves further down the line, eventually leading to the cinema, as the stars’ interviews are projected on the big screen for us fans to see and hear.

That’s it! The red carpet was over, and so, with now freezing toes, I made my way back to the crowded Tube and headed home.

One last look upon leaving…

Wow, that was such an incredible evening! And I can’t believe that I met a superbly talented OSCAR-WINNING actor, who I’ve been obsessed with since seeing him as Marius in Les Mis.

📚Currently Reading 📚
From besties to something more! Today I’m paying homage to some of my favorite friends-to-lovers tropes and stories! 💗💗
Not going to lie: I’ve been in a bit of a reading slump (which has stretched to my bookish plans for this account unfortunately). These slumps are THE WORST because you sometimes really want to read but just can’t pick up that book. Anyone else?
A very emotional bookish summer. Seriously. So after seeing y’all here on #bookstagram or #booktok rave over Colleen Hoover books, I had to check them out for myself. After devouring and sobbing my way through #ItEndsWithUs, I had a desire to read ever other book she’s written. Next up: November 9 (pictured) and Ugly Love.