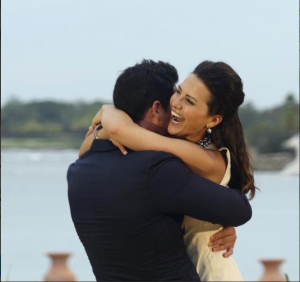 Photo credit to Abc and wetpaint.com

Watching the finale, I admit I squealed. It was evident Josh was in love… And that homemade baseball card with Andi’s “stats?” Priceless! (Especially when it said, ‘Andi Murray!’)

Of course, Nick (who claimed to be the “frontrunner” all season long), threw us all for a loop when he insisted he was still in love with Andi and that she made a mistake. (Can it be noted that this happened AFTER she was already engaged?!?)

Congratulations Josh & Andi! I wish you all the luck and love of past Bachelor success stories, like Des & Chris, Sean & Catherine, Ashley & JP, and Trista & Ryan. (You had this fan rooting for you since Day 1.)