Yes, that’s how I spent my Sunday night: at the Katy Perry Prismatic world tour stop in St. Louis. I thought I’d recap, review, and rehash the fashions and the happenings of the show

At the beginning, there were glow-in-the-dark warriors (her dancers) doing aerials across the stage. Pretty impressive. Then, Katy comes out (bursts through a giant triangle  in the floor) and singing “Roar.” (Which I knew would be the opening song.)

Then she went into “Part of Me” and practically yelled every lyric. Not so endearing.

With the fashion, I was expecting a hell of a lot, knowing what Katy Perry is capable of. Her first outfit is very couture with glow-in-the-dark abilities.

Very edgy and couture, especially this shot. But, it is indeed a crop top and skirt.

Then, she appeared sitting sidesaddle on a mechanical horse to intro “Dark Horse.” Personally, I think this song would do better with black costumes as opposed to gold sequins and purple (here in a bodysuit). Honestly, I ended up dancing more to Juicy J’s section in the song than Katy’s and he wasn’t there.

Here’s her Dark Horse apparel. But what is that skunk-pharoah hairdo? Not good.

During the first several songs, including “Legendary Lovers” (which didn’t have a good crowd energy), a father sitting behind me kept yelling for my entire row to sit down. You do realize this is Katy Perry? And it was during her big dance hits! Who would actually sit during that concert?

For the song that “put her on the map,” “I kissed a girl,” Katy appears in a lilac bodysuit. very couture. Like. Although, I did not like the background vocals that yelled the lyrics out. KP lacked energy for her first major hit.

Then, we kept waiting for the standard long dance break and guitar riff for her to change into another ostentatious couture outfit.

Then, it’s Welcome to Kittywood with a cat themed set to sing “Hot N Cold.” She’s wearing a pink sequined leopard inspired bodysuit and her face was completely emotionless during that set. It sounded robotic and creepy, including the normally-upbeat chorus. Do not like.

At this point, KP has yet to address the crowd. Total dislike.

Then she sings “International Smile” and I can’t hear the vocals, there’s way too much bass. I don’t know what she onstage changed into, but it looked very haute couture, to which, she does a runway walk to Madonna’s Vogue. Do you think Katy is gunning for a guest judging spot on ANTM? After all, she treated her concert like an over-the-top fashion show.

Next set is at the very tip of the triangle stage, covered in sunflowers. She adds, “I just had to change into something more SPARKLY.” She sounds a bit, crazy.

I love the bottom of her flower dress, so couture. I’m not crazy about the over the top sparkly bust.

She sings “By the Grace of God” and for the first time all night, I can actually hear her vocals, which are pretty good. It’s a beautiful ballad and really shows her passion for music and performing.

But that wig! It’s almost making a mockery out of her beautiful song and vocals. What a shame.

Then, the first support act, Ferras pops out to duet “Legends Never Die,” which wasn’t bad. He was weird hair, but I like his song. Pretty vocals, Katy’s voice too.

She brings out a glitter acoustic guitar for “The One That Got Away.” It’s a ballad-remix. It sounds pretty, but so sad. Hmm….

Then, she infuses that with “Thinking of You!” It’s one of her old hits I loved! Thanks for bringing that back, KP! Definitely one of her old best songs.

She goes into “Unconditionally” and the crowd lights up their flashlight apps. I love the song to begin with, but Katy’s dancers made butterflies that flew around, that made it way too adorable for the song.

Towards the end, I was no fan of her costumes. Too crazy and out there. Stick to the couture. Much better.

Her new song, “This is How We Do” sounds totally synthesized and I didn’t like that.

She goes into “Teenage Dream” and “California Girls,” where she changes some lyrics to fit the town. And she sports what is a couture version of a sexy Tinkerbell costume. 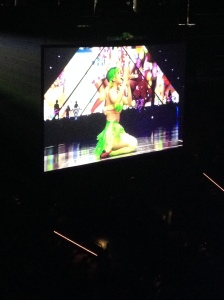 At 10:57, it’s time for the encore. She appears in a pink vinyl dress turned bedazzled nude body suit for “Birthday” where she celebrates a local girl’s bday. How sweet. And she does that at every show! Then, she flys across the audience.

She ran across the stage and hi-fived members of her band. How down-to-earth. I love it when stars act like regular people. 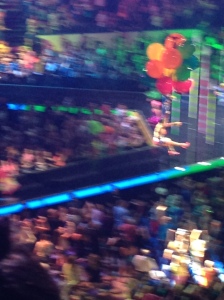 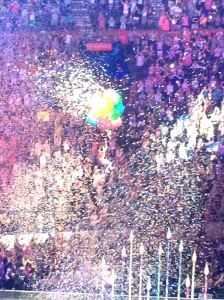 Then, she plays “Firework” wearing a firework-inspired ball gown with blue glitter pants underneath, which I want. The song sounds just like vintage Katy, including her old hairstyle of long brown hair with a bang.

At the end, her triangle stage fold up with her inside, the opposite of how the show started.

All in all, it was very theatrical and over-the-top, but, nonetheless, it was entertaining. I had fun.

One thought on “Theatricality is a must at a Katy Perry concert.”