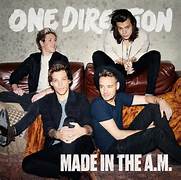 Hi everyone,
Being that I’m currently in London, England, I thought a music review about a locally-grown boy band was a bit necessary… Agree? Let’s take a closer look, track-by-track, of the newest album to come out of U.K. hometown favorite One Direction.

First off, I would like to preface this by saying that this randomly popped on shuffle as the Tube in the morning arrived at the Angel station. True story, so that’s perfect right there. Okay, now back to the song. It’s catchy and makes me want to dance. However, the lyrics: if they are calling out the “angel” to “come to the other side,” are they insinuating that they are on the evil spectrum, like a devil persona? But, lyrics aside, let’s get back to dancing along.

This song has been out since summer, and I have to admit that I still can’t believe I heard the boys sing it LIVE for the first time on Good Morning America. (An awful mistake I will never again.– To clarify, that’s in reference to the waiting and the weather, not seeing them live for free.)

Again a popular hit, but I can’t get sick of it. It’s such a good tune and it is still my alarm every single  morning.  (Hey, shouldn’t it be?) But seriously, if you don’t think Harry (who wrote the song) wrote it based on T.Swift, listen closely to one specific line at the end about “if you’re looking for someone to write break-up songs about.” Not a very tricky mystery, Mr. Styles.

Okay, so I really liked this as the first preorder track. But, as now I have the entire album, I kind of almost forget about this hit. It’s not bad, it’s just fairly typical of the One Direction sound.

This is a fun, upbeat song that makes me want to sing (and dance) along. Nothing else to say about it. Also, yes Liam, this is a perfect instinct where your lyric (once again) references hospitals. (Note: this is a reference to something Mr. Liam Payne discussed at the 1D concert I was at in London.)

I. LOVE. THIS. BALLAD. It’s so beautiful and soft, I love it! One of the only ballads about true love. However, I guess should it actually be called “For your eyes only” or something, I mean they say that way more than the actual title which is only muttered at the very beginning of the song.

Another good slower tune. I also would like to point out that I do dance along to this track. And it’s harder to dance to, but I have. Anyway, the song, it’s really pretty and I like it. One of my faves.

This has a very different, but still good, beat. It’s upbeat and fun; I like it. However, the “random noises” you hear between lyrics sounds like something out of the Lion King… Now that I said that, I’ll never be able to un-hear that. Also, this is a song that Liam thinks he could sing over and over again (Haha, anyone catch that small reference to the older days?? Okay, I’m done now.) for the rest of his days, so that indicates something. And you could, I’d be fine with that. It’s really good and fun.

It is so interesting how the first eight seconds shows how the recording process happens, I like that– it’s interesting. It’s upbeat, but not my favorites. The chorus where they sing “I love you, I love you, I love you…. Olivia,” it sounds a bit like they were saying a line and like “word vomit” essentially followed the line; that’s what it sounds like. (Note: No offense to any Olivia’s out there screaming of joy about a track that share their name.)

This has serious flashback vibes, with the music and the title. But, that aside, it’s good, in a very retro vibe. The chorus where they all sing together, reminds me of the boys’ X Factor days of all singing in harmony.

Every album needs at least one break-up song, right? Rumored to be based on the emotional heartbreak of the break-up of Louis Tomlinson and long-time girlfriend Eleanor Calder, it is very emotional and I like it. But then again, ballads tend to be my preference.

Not my favorite song, but it’s still a cute song about an innocent first love story. This seems to have some indie, songwriter, playing-guitar-around-a-campfire vibes embedded in this tune, which isn’t necessarily a bad thing.

OKAY, WE FINALLY MADE IT HERE. This is definitely one of my favorite tracks on the entire album. I love the music, the lyrics, everything. I love it. And the meaning about it being for the fans is to sweet. Especially, how Niall and their songwriting team brought in the fans to sing on the chorus, like it’s truly for and by the fans. Adorable. Also, that part that “this is not the end,” is a perfect reminder that the boys are going on sabbatical/hiatus (Note: this is in reference to an interview conducted by Nick Grimshaw on Radio 1.) It’s such a cute dedication to the fans and how much they support the boys each and every day.

Love this song! I love the upbeat tempo, and it’s giving me serious “Alive” vibes. For those who don’t know, “Alive” is one of my favorite songs from the “Midnight Memories” album. It’s fun!

Not my favorite song, but it’s still a cute song. This gives me some indie, songwriter, playing-guitar-around-a-campfire vibes, again not a bad thing. Also, very reminiscent of older hits ala “Story of My Life.”

Upon re-listening to this track, I’m liking it even more! It’s fun, upbeat and I’m enjoying it! The intro is giving me like 50s vibes? Right?!? But, it’s dance-y, also reminds me of “Alive,” which I like.

This is very cute. A little cheesy that it’s a song about how good memories are “made in the a.m.” But, it’s adorable.

This is really good FIFTH album boys. I hope you enjoy your… hiatus, and when you come back, know that you’ll still have a fan right here.

2 thoughts on “Music Review: One Direction’s “Made in the AM””