It’s Sunday, and while most people are focused on the Superbowl and all that sporty stuff, I’m still obsessing over last Sunday’s, in my opinion, more exciting televised event. That’s right: I’m referring to Grease Live. So, I thought I’d recap the best moments below.

1. First, Grease is the word with Jessie J.

It is a cool way to embrace how it was filmed on a soundstage and the live audience in attendance, it makes it more interactive for the viewers. I do miss the cartoon Danny from the film though.

2. Next, I don’t think that anything could ever top Summer Nights.

The Pink Ladies, Sandy and Patty Simcox– eh.  The T-Birds: YES PLEASE. Best part of the number, from vocals, choreography and characterization. Plus, all the Broadway vets in the production!

3. I wish some of the characters tried to make the characters their own rather than simply copy what been done to death, and honestly can’t measure up to the original film. (I mean– Jan, Kenickie, Frenchy, Putzie– you couldn’t have been any more original?)

4. Best number of the show, hands down! Is it systematic, hydromatic, ultramatic, or…?

The choreography alone is stunning! Zach Woodlee (“Glee” fame) did a phenomenal job, as did legend William Ivey Long on magic costume and set changes… during the song! Truly is movie magic. Except the word changes… those were quite apparent, because the meaning didnt exactly line up.

5. And for the character/song, we didn’t know we needed…

Jordan Fisher’s Doody crooned the originally-forgettable ballad while everyone on camera and at home swooned. Not going to lie, this is my current alarm sound in the morning… I had never heard of Fisher prior to Grease Live, but wow, boy’s got pipes. Also, Aaron Tveit nailed John Travolta’s sports montage– live and on camera!

6. MVPs of the performance: Blanche, Eugene, Patty. Bringing humor, Noah Robbins, Elle McLemore and Haneefah Wood entertained us thoroughly with new lines of dialogue and nonverbal moments in a scene.

7. ONE OF THE MOST ICONIC [hilarous] SCENES…

It’s just very humorous. Nothing else to report, just enjoy! 🙂 (But, why the need to change Putzie and Jan’s conversation to make ‘less offensive’?? Especially, since they left the whole teen pregnancy story in…)

In a brand-new Frenchy tune, penned by Broadway composers Tom Kitt and Brian Yorkey– who most recently wrote the amazing musical If/Then– is just— wow. It’s so Broadway, and very much in the same style as If/Then, which makes sense considering the composers… But, wow, it’s so beautiful. Also, the Frenchy-Frenchy moment between Carly Rae Jepsen and Didi Conn (aka the ORIGINAL Frenchy)– amazing! I wish the two Doody’s got a similar interaction (Jordan Fisher and Barry Pearl)!

Seriously? Such an inventive remake on the Frankie Avalon classic with Boyz II Men! Great job from everyone! Except, Jepsen– her acting wasn’t quite believable: it felt like she got nervous that Boyz II Men was serenading her and forget she wasn’t herself, but a specific, beloved character.

And I loved it, except how they changed the hand jive!! How could you change such as classic?? But, who else was laughing at Joe Jonas (of Disney fame) as Johnny Casino… Too funny.  But all the partner choreography was incredible: congrats Zach Woodlee!

Seriously, such a superstar moment. Vanessa Hudgens was flawless, especially considering her personal loss that morning. A true star.

And Vanessa? A few people want to say congratulations for this role and performance… And Broadway wants you back. 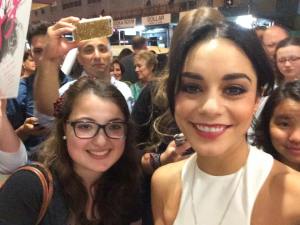 And the finale? Was truly perfect. Love the similar vibe from opening with weaving through the sets, and singing while on the golf carts, ala James Corden’s Carpool Karaoke masterpieces.  Loved it. I was singing along— oh wait, what just happened? Ensemble member hit the curb. Oops, second golf cart. Also, the cast’s facial reactions= priceless.

13. The show was done to Broadway caliber… Tommy Kail (Director Extraordinaire of this AND a little show called Hamilton) did a brilliant job at making a Broadway-worthy moment available on television. And having every single ensemble member get a curtain call? Bravo. (Who caught the original Pink Lady and T Bird jackets that Didi Conn and Barry Pearl brought out?? Too adorable!)

THE BAR HAS BEEN RAISED, future live televised musicals… No idea how NBC or future FOX productions can compare…