Tonight’s the Grammys. So, my red carpet commentary has returned. Let’s get started!

Kacey Musgraves: Well, her hair and makeup look simplistic yet really pretty. I’m not a fan of the dress– it’s the sparkles and the colors…

Here’s what it resembles to me:

Doesn’t it though? I’m not sure looking like a childhood picture book is what every Hollywood starlet wants to resemble on music’s biggest night…

Charlie Puth: One, I’m totally obsessing over his voice and latest hits on the radio! And second, I love that he’s wearing a GLITTER suit! So epic! And cool for a guy. It’s so easy for a guy to throw on a plain tux, but he’s made fashion for guys and way less mundane than most men on a red carpet.

#BFFGoals, anyone? Besties Taylor Swift and Selena Gomez show up totally glam in their bright-colored gowns. As Gomez told Ryan Seacrest, she chose her Calvin Klein sparkly blue dress by asking herself, ‘What would I do if I was going on a date…and my date is Taylor Swift.’ And who else could rock a crop top/color-blocking gown (Atelier Versace) on a red carpet like Swift? But, I’m not a huge fan of her hair cut… Don’t get me wrong, it’s well done; I just don’t like how it resembles a vintage-y vibe, yet that’s not really her brand anymore?? But, I’ll forgive since everything else is impeccable.

Carrie Underwood going “Old Hollywood Glam” in a black strapless gown, an Angelina Jolie leg slit, with a chic bob. But, when does she ever look bad on a red carpet? Next. 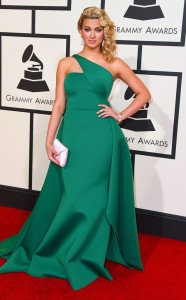 Tori Kelly looks stunning! Also, embracing her inner “Old Hollywood” actress vibe in this green, fitted gown. While it may be a bit much for the funky awards, she is nominated for New Artist, so I’ll let her have this one, since it’s such a huge moment for the new singer…

OH MY GOSH, Adele in this Givenchy is perfection!! Not to mention it’s a CUSTOM gown. Wow, she looks incredible. Gorgeous. End of story. 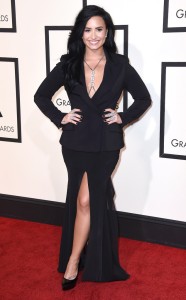 Newcomer to the Grammys, Demi Lovato looks flawless in her tailored gown/suit look. And her hair is perfection. However, what is the chain necklace thing with the three pop tabs in the middle? Is she raising awareness for the Ronald McDonald House? (I mean that would be great, but I’m not sure if that’s what it really is…)

John Legend and Chrissy Teigen always look flawless on the red carpet and here is no exception. It’s just extra adorable with added element of being their first family red carpet photo.

Speaking of adorable family photos- Justin Bieber playing with his little brother is the cutest.

Now off to watch the award show, and see the cast of Hamilton kill it live from NYC! (Side note: if you can get tickets in Manhattan, seriously, go see Hamilton. You won’t be sorry, and this performance will surely prove it.)