As this post title suggests, it’s been exactly one week for my second Manhattan summer and basically everything I’ve done involves fashion and Broadway. But, that’s not a bad thing at all, right?!?

To start, on Wednesday I decided to try my luck at the Ham4Ham lottery (though I knew it’d be fail, as it was last summer.) To clarify, the Hamilton lottery is best described as a needle in a haystack, where thousands of people head to the Richard Rodgers for the sole in-person Wednesday matinee lottery for $10 front row seats or a few standing room options, where they put their name in a huge barrel of a basket— yeah, chances are slim. Knowing it’s highly unlikely that I’d win, I mostly went to see the Ham4Ham show. So, two hours before creator and star Lin-Manuel Miranda tweeted a New York Times article about the Hamilton softball team in the Broadway league, which was “required reading” for the lotto… Unsure what that meant, I went anyway with no thought of what would be performed.

I wanted show you all what it’s like to go to Ham4Ham, so enjoy the video below. (Sorry if it’s hard to see– it was really crowded and I’m vertically challenged.)

After I lost the lottery (as expected), I still felt like seeing a matinee, so I walked one block over to Waitress. I heard they had Standing Room seats, but the show wasn’t quite sold out, so I decided to get the cheapest available option in the mezzanine– and I’m so glad I did, because the show was great! (Been listening to the cast album on repeat all week!) 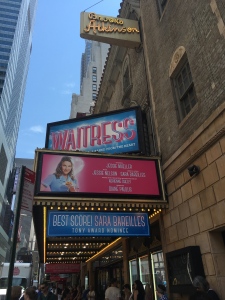 Then at the stagedoor:

Cute sisters McKenna and Clair sign Playbills for their split role as Lulu, Jenna’s daughter in the epilogue. #tooprecious 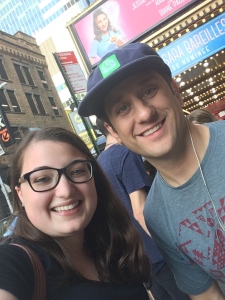 Oh, hey- Chris Fitzgerald! I just had to congratulate him on his TONY NOMINATION!

I went home to get ready for my first day of work in the morning.

If you don’t know, I’m a Styling Intern at Brandon Maxwell (if you don’t know who he is, he runs a luxury fashion label and is a stylist.) What’s life as a fashion intern like? I’m hear to tell you… So, on Thursday (my first day), tasks included unpacking and packing garment bags and trunks of clothes, picking up a giant crystal pennant from Swarovski, dropping off and picking up garment bags, and at the end of the day, drop off gifts for models at IMG and Women Management. I also learned that heels are great aesthetically, just fashion interns are on your feet all day, both standing and running errands, so let’s just said I had some bad blisters… by lunchtime. Yea…. Then, on Friday my tasks included, drop offs, organizing the design studio, creating PDFs of the looks, running to Barneys to find 11 pairs of Manolos  (such a hard life, right???), sending out trunks and packing. Very busy, but I love being deeply immersed in the fashion industry!

When I got home, I made dinner and promptly went to bed. Then, my alarm went off at 5:30 a.m. (See I had a logical reason!) I got up, got ready and headed to 45th Street (aka Broadway) and planted myself on the sidewalk outside the Gerald Shoenfeld theater where I was tenth in line for day-of rush tickets to American Psycho, closing June 5. After waiting for three hours in the longest rush line on 45th street (it went passed the Booth and looped into Shubert Alley!), I was able to get a ticket for the evening show.

It was a really great show! Ahead of time, I knew nothing about the musical, the book or movie– and I think that’s better. If you don’t have any expectations, you’ll enjoy it more and can’t get let down. Every aspect was phenomenal, it’s a shame it only got Tony nods for lighting and set (well deserved, but still…) and that it’s closing…

Side note and brief theater rant: It’s a shame how so many amazing Broadway productions are closing because of low ticket sales and no Tony love (probably because Hamilton got everything); just because a show is completely original, artistic and different from anything I’ve ever seen (yes, I’m talking about Psycho here!) doesn’t mean it should close…. Sad face that Broadway can’t keep the greats…

And after the show, of course I had to stagedoor– getting autographs and even a photo! (And at the stagedoor, I noticed Bob Lenzi aka Miles from Tuck waiting there for his girlfriend at her stagedoor– talk about an adorable Broadway couple.)

A photo with Jen Damiano!

And later, guess who I learned also went to that show? Why none other than LEA SALONGA. SHUT UP, that’s so legendary– that I was in the same room as her, watching a show!

So, I’d say fashion and theater will be the major themes of this summer!

One thought on “One week in and it’s been all about theater and fashion… But is that a bad thing??”