As the title suggests, I’ve been a little preoccupied to update this in a few weeks. Oops. Well, better late than never, right?

So, my last post concluded with me seeing American Psycho in its final weekend. So, next was work as usual– I’m a full time intern, which means Monday through Friday, 10am-6pm. My daily tasks range from fashion research (finding new looks and compiling inspiration into mood boards and look books), runs (where interns such as myself go drop off clothes and accessories, pick them up or find things for a client or shoot), and general organizing, unpacking/ packing of clothes (as per the Styling Intern title I possess). I do have to say– this internship is the best exercise I could ever hope for: you run around all day, all over the city, carrying different weighted objects… what workout could be better? or easier?

Then, Saturday, June 11, I woke up super early and arrived to the rush line at 6:55am (where I was first in line, thank you) to get rush tickets for that evening. I went to see Fiddler on the Roof (pre-Tonys). My rush seat was literally in the THIRD row, orchestra. Like, I was super close to the incredible cast! AND the show was amazing! Then, as expected, I had to stagedoor. I met patriarch and matriarch as played by Danny Burstein and Jessica Hecht, and their five daughters, as well as the rest of the cast. And at the end, Alexandra Silber (Tzeitel) came out and asked if we were excited about the Tonys tomorrow (of course we said yes.) And then I asked how she felt “getting married” on live television. To which she said she always envisioned having a small wedding. (You know, a small wedding counts as millions watching it on live TV, right?!?!)

The next day, as I was planning out my schedule, I realized in the two weeks I had been here– I hadn’t made it to Shake Shack yet. WHAT? How could that be? So, I had no choice but to rectify that immediately, as I headed for a milkshake at lunchtime. Who cared about real food, I clearly just needed a milkshake, obviously. And that night was the Tonys– or as I like to call it: An Ode to Hamilton. Rant time: as good as Hamilton was/is and how much I enjoyed it, there is/was SO many other amazing pieces of theatre out there this season that got shut out of the awards because Lin’s genius work, and I just wish the awards could have featured those more too. (Like did we really need Cordon’s intro and exit song to be just the Hamilton cast?? No.) I mean, Hamilton is good yes, but in no way could anyone call it one of the top musicals of all time… Like, I’m sorry, but you can’t say a hip-hop rap musical is better than all the classics even the cast and creative team of Hamilton so revered their entire lives… Sorry, just had to speak my mind while thinking about it…

Another work week went on as usual. And Friday was the most rigorous exercise yet! So, I had to drop off two huge shopping bags full of Jimmy Choos off uptown. So: picture me walking across town, up several series of steps carrying to full bags of stilettos in each hand– pretty good exercise opportunity, while accomplishing a work task.

Then, yesterday (Saturday) I went to a Standing Room line at 4:30, waited until 6pm when I could officially by my ticket to Shuffle Along, or the making of the musical of 1921 and all that followed, that night, featuring the legendary stars of Audra McDonald, Brian Stokes Mitchell, Billy Porter, Joshua Henry and Brandon Victor Dixon.

Let me clue you in: Standing Room Only (SRO) are tickets, often sold in place of rush tickets, where the seats are just places standing at the back of the theater at orchestra level, see pictures below. (And who cares about standing for two hours?? It was so amazing, I hardly realized I was standing at all.)

My “seat.” AKA, leaning up against this half-wall.

But the show– everything was phenomenal: the sets, the costumes, the dancing (Savion Glover is a genius!), the talent. I mean, Billy Porter, Adrienne Warren AND Audra??? Like, wow. AH-MA-ZING. Then, per usual, I went to the stagedoor. 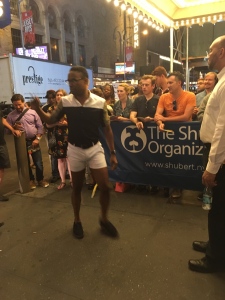 Adrienne Warren (From a Bring it On cheerleader to a Tony nominee!) 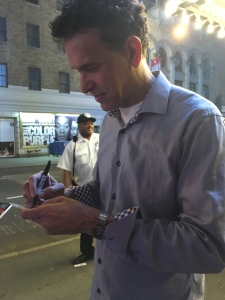 Brian Stokes Mitchell (yes, he was Rachel’s dad on Glee…)

That’s the recap. Be back soon. (I’ll actually try to keep that promise this time.)