It’s no secret that I’m a big reader. I could read all day, all night, and just about any time in between. And this summer, I’ve been reading a lot. So settle back into Miranda’s Book Nook for another week of Book Club where we can chat about my new favorite reads. And soon, you’ll be just as obsessed as I am. 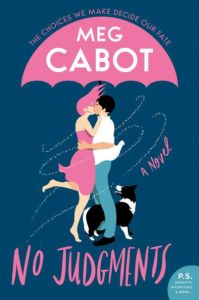 No Judgments by Meg Cabot

What self-respecting tween girl wasn’t obsessed with Meg Cabot’s stories growing up? Then, growing up and finding her adult novels, only to discover her knack for writing and telling captivating reads has remained. With No Judgments, she tells the story of a sweet yet charming romance in the middle of a hurricane while attempting to rescue local pets.

The novel takes readers to Little Bridge Island, Florida as a massive hurricane is about to touch down. New girl in town Bree isn’t quite worried after just escaping the storm of a bad breakup, but the animal lover is concerned about the pets separated from their evacuated owners and makes it her mission to take care of these critters. But she can’t do that alone, and her boss’s heartbreaker of a nephew Drew is enlisted to help her. Of course, feelings start developing as they grow closer.

It’s more than just a romance as we explore the complexities of two souls in Drew and Bree as they come together over their similarities. Fans of Meg Cabot and animal lovers are sure to enjoy this cutesy read. Very enjoyable, but give me a Cabot novel that isn’t?? 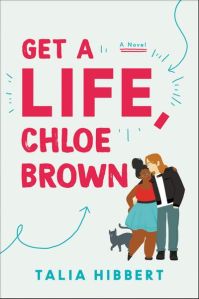 Get a Life, Chloe Brown by Talia Hibbert

Very easy to get hooked on this lovable, romantic beach read! There is plenty of sweeping romance expected of the genre, which is why I was initially intrigued. However, as soon as I flipped to page one: I was hooked on the author’s descriptive writing and portrayals of her characters. Hibbert brings Chloe Brown (and a dreamboat in artsy, protective Red) to life as two strong individuals with even stronger (and fiery) chemistry as their relationship develops and blossoms into something beautiful, emotional, and even quite steamy in this realistic, contemporary novel.
What this book gets right is its oh-so-important representation. Many times, readers often see the same types of protagonists and it’s refreshingly honest to see a book focus on a character that is more reminiscent of reality in Chloe Brown. Brown as a body-positive POC, who is living with a disability (without letting any of that faze her) is exactly the type of representation we need in books more to accurately reflect the people we are. I absolutely adored this book and definitely plan to re-read. So darn cute.
Available: November 5, 2019

Obviously, any self-respecting millennial has heard of (and obsessed over!) Shepard’s Pretty Little Liars series for YA readers. So, as an adult, her new literary works are must-reads. First, I was pulled into The Heiresses, and so, I was instantly intrigued by the premise of this new book.
When Aldrich University is rocked by a hacker leak, it exposes some deep university scandals and rumors amongst faculty, alumni, and students. Only amplified by the murder of Kit Manning’s husband Dr. Greg Strasser. The thriller follows Kit, her reporter sister Willow, as they aim to uncover the truth about Greg’s death. The novel is told from multiple points of view, exposing a collection of women’s secrets in this small college town as they try to best protect their fragile reputations.
The read is compelling, the characters are honest and have depth, and the story is full of twists and turns along the way. You can’t put it down, you’ll be waiting with bated breath until you reach the final page to discovery the truths of the mystery as it unfolds.

I first read Hot Mess a few years back and fell in love with the easy storytelling, can’t-put-down vibe, and obviously plenty of romance. Upon hearing Belden had a new book, I was instantly sold. Fast forward to reading Husband Material and I couldn’t put it down.
The novel follows widow Charlotte moving forward with her life five years after the horrifying day when she lost her husband so young. Everything seems to be on track until her late hubby’s ashes suddenly appears on her  doorstep. She balances her new life, old feelings, a demanding mother-in-law, a new romance, and a surprising secret in this enchanting read.
It’s a quick read full of twists, turns, and of course, sweeping romance. (I mean, the story of how Charlotte got her pup Leno just wrecked me!) It’s so sweet and easy to get lost in. I want a Decker or a Brian, or, OK fine, I’ll just read it again. I couldn’t put it down, obsessed.
Available: December 20, 2019

I couldn’t put it down! It’s a heartwarming multigenerational tale of three vastly different, independent women all tied together around one Grace Kelly-inspired wedding gown.

The novel is told from three perspectives of women in relation to one Kelly-inspired wedding dress: modern bride Rocky, her mother Joan, and Parisian seamstress Rose. While each woman has her own idea of love and wedding dress styles, this fast-paced story brings them together with the power of family. It’s sweet, uplifting, and enjoyable.

You Deserve Each Other by Sarah Hogle

It starts off like an anti-love story that’s gone far from the early swoonworthy days into a battle of who will outlast the other in the relationship, but with time and book pages, they slowly warm to each other again as accomplices, BFFs, and lovers to become even stronger.
Naomi Westfield has a perfect life, including a Prince Charming-esque fiancé in Nicholas Rose. While prepping for their glam society wedding months away, it is revealed this perfect couple are sick of each other, and in fact, Naomi can’t even remember how they met or even fell in love to begin with! To avoid calling off the wedding and thus paying for the extravagant affair, the duo go head-to-head to see who break first. But without any pressure to be perfect, they start to rediscover themselves and their buried feelings of love.
It’s not a romance where you expect the lead couple to be together without any problems, but Nicholas and Naomi have to work for love and to open up, discovering who they are as individuals in the process. By the time they reclaim their love, it feels earned and justified. It’s well-written and intriguing and had me hanging onto every last word. One of my new favorites, that’s for sure. You guys, I literally started this book waiting in the airport for my flight to board and couldn’t get off the plane until I reached the very last page. Five stars from me for this debut novel. Seriously, it has everything I want in a women’s fiction/contemporary romance story.

Advance reader copies of each book were provided by NetGalley in exchange for an honest review.

📚Currently Reading 📚
From besties to something more! Today I’m paying homage to some of my favorite friends-to-lovers tropes and stories! 💗💗
Not going to lie: I’ve been in a bit of a reading slump (which has stretched to my bookish plans for this account unfortunately). These slumps are THE WORST because you sometimes really want to read but just can’t pick up that book. Anyone else?
A very emotional bookish summer. Seriously. So after seeing y’all here on #bookstagram or #booktok rave over Colleen Hoover books, I had to check them out for myself. After devouring and sobbing my way through #ItEndsWithUs, I had a desire to read ever other book she’s written. Next up: November 9 (pictured) and Ugly Love.