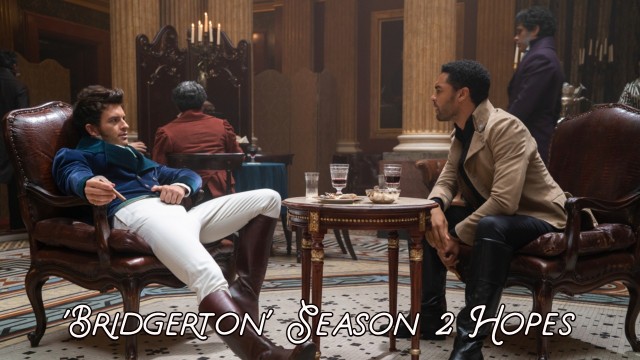 If you’ve followed along with Miranda’s Book Nook all lockdown long, you already know that I became a tad ~obsessed~ with Julia Quinn’s Bridgerton series before the show even dropped and you could binge-watch the first season on Netflix, and you, like me, may have watched the adaptation in just one day.

Now, with the news that the Shondaland series will return for a second season on Netflix and will be focused on Anthony’s journey to find love, as inspired by The Viscount Who Loved Me, I instantly was stoked. Join me as I recap the best buzzworthy moments (if you know you know, but if not that was a very clever pun you’ll get in just a few moments) from Quinn’s second book, in chronological order, that just *need* to be seen onscreen in the second series.

**Note, this post does have spoilers from The Viscount Who Loved Me.**

The prologue has a lovely backstory of Anthony’s childhood and his relationships with his parents and siblings. Much like the first season of the show, I do hope we get to see this backstory in a flashback scene. I want to see Anthony and his family playing at the country estate, his heart-to-heart with his father, and processing his grief individually.

2. The Most Reprehensible Rake with a Capital R

While TV viewers may think Simon was the rakiest rake there ever was, that honor is actually all Lord Bridgerton’s himself, right from page one. All I want to hear the incomparable Julie Andrews recite that monologue from Lady Whistledown’s first article, all about how Anthony is a Rake with a capital R aka the most dangerous kind of rake. Also, side note, I’m positive that “The Most Reprehensible Rake” should definitely be the title of the first episode of the season and you cannot convince me otherwise.

3. Newton In All His Glory

I hope, hope, hope the casting team does its due diligence to find the cutest and rowdiest corgi pup to portray Kate’s rambunctious doggo. Also, I just want to say that Jonathan Bailey cuddled up with said pooch will steal every scene and Every. Single. Take.

By this point, the youngest Bridgerton brother is a mere 13 years old and a full-on prankster. As Colin reveals to Kate at the first ball, the G sibling often puts frogs on people’s chairs, which is how you can separate him from big bro Anthony. This would be a fun, short moment of levity on the show, and I’d be all for it.

First off, y’all know I have a weakness for a good E2L romance with delicious banter, and honestly, no Bridgerton couple delivers that better than Anthony and the quick-witted Kate Sheffield. From their first dance even, you see that tenfold and, boy, I cannot wait to see Bailey’s pure chemistry with whoever is cast as Kate. Then, based on Anthony’s dreams of her kissable lips and her body to their first kiss and beyond, wooo, are we in for some even steamier scenes this season!

During his mama’s ball, which featured Italian opera singer Maria who’s definitely meant to be represented by Siena in the show, Anthony sneaks the songstress away to his study for an intimate moment. However, little does he know, Kate needed a breather from the social scene and was hiding out there. The best moment is where Kate, hiding underneath his desk, bites Anthony’s ankle like a dog to avoid getting caught. Lolololol aren’t y’all gonna be shocked to see it but, sweeties, I’m so ready for that scene.

7. Lady W Laying Down the Law About Men

This is one of Whistledown’s funniest and most relatable lines from her news sheet, and I need Julie Andrews to read it out in full with her signature flair. The line is as follows, “Men are contrary creatures. Their heads and their hearts are never in agreement. And as women know all too well, their actions are usually governed by something else altogether.”

8. The Rules of Pall Mall

Ok, I’ve been waiting to see a game of Pall Mall on the show ever since I read the first game scene and saw their family dynamics on screen! It could take the place of a scene much like the one last season where the family was all in the park pre–promenading. I want to see Kate steal Anthony’s black Mallet of Death ball and leave him with the pink one to his chagrin. Oh, they better not cut this game from the show.

9. A Lovely Bond with Penelope

During the Bridgerton country estate party, we see Kate’s blossoming friendship with Penelope Featherington. I, for one, cannot wait to see this beautiful relationship grow onscreen between Nicola Coughlan and whoever’s cast as Kate.

Also during the country party, we see Anthony come to Pen’s rescue when the wicked Cressida Cowper bullies her. Kate witnesses this, which of course makes her swoon even harder, but I love seeing this softer side of the viscount and how he’s just such a good friend.

11. Kate’s Vulnerability and Anthony Just Being There

Once again during the country event, we see Kate’s traumatic sleepwalking during a thunderstorm. That’s not the moment I want to see in particular, but rather its aftermath. I want to see her curled up in a ball in the library as Anthony finds her and comforts her, displaying yet another softness to him. That’s the Lord Bridgerton I was a fan of while reading and who I want to see Jonathan Bailey portray on the show.

You had to know this one was coming, right? It should be quite obvious, but that doesn’t make this scene any less iconic. After Kate and Anthony went for a walk around the garden, we see she gets stung by a bee, which in turn traumatizes the viscount because of his father’s death. So, his only logic is to pull down her bodice, still in the garden mind you, and suck the bee venom out. And of course, his mama Violet, her stepmother Mary, and Lady Featherington all spot what’s going down and insist on a proposal because lord knows Miss Portia Featherington cannot keep anything to herself.

Once engaged, Anthony presents Kate with a simplistic ancestral diamond ring. The fashionista in me just cannot wait to see what the wardrobe team will dream up to bring this facet of her costume to life!

While Daff was very underinformed about the birds and the bees going into her wedding, Mary wanted to make sure Kate wasn’t before her own big day. I really want to see how the show writers will script out this potentially awkward talk, but also sculpt it towards the female gaze by focusing on female pleasure specifically.

After their wedding, Anthony and his new viscountess have such a swoon-worthy yet steamy romance ahead that viewers will surely go nuts for. I mean, when Anthony tells her on page 261 that he’ll give her “anything in my power” that she asks for, just like GAH. And her response is “just love me,” repeated several times. I cannot help but melt and need those words written into the script.

Once Anthony realizes he’s crazy in love with his wife, he rushes off on horseback to find her and tell her. I cannot wait to see Jonathan Bailey on horseback, but also that terror on the face once he sees the carriage accident and that worry he might not get to tell her how he’s feeling. Her leg’s broken and bloody, and immediately he says those three words with such urgency that never fails to give me goosebumps. I cannot wait to see Bailey play that.

17. A Happily Ever After

In the book epilogue, we see Anthony surpass his 39th birthday and the year he thought he’d die per superstition. This party, with their kids and his siblings, would surely make the perfect ending scene for the season.

Ok, this final page of the epilogue was how I knew exactly who Lady Whistedown was because Kate tells her husband that it seems odd that the popular writer extensively writes of his brother Colin an awful lot. Like a ton. Hello, clue alert! So, that would be a fun nod to the book and an easy way to wrap up the season to mirror the first season’s final season as well.