One thing about myself: I’m– err, is “obsessed” an okay word to use here– okay, fine, obsessed with cheesy Lifetime romance movies, and specifically royalty themed ones at that. I devour them all, with pleasure. Sometimes you just need to kick back and watch a feel-good, happily-ever-after film to calm down and relax, right? Especially in today’s stressful times. So, at the mere announcement that Lifetime would make another made-for-television movie chronicling the courtship and eventually engagement of the Royal Family, needless to say, I was excited. I mean, I loved their Will & Kate love story movie that aired back in time for their 2011 Royal Wedding starring Grey’s Anatomy surgical resident Camilla Luddington as the future Duchess.)

So, in preparation for the Royal Wedding later this week, of course I had to watch Lifetime’s “Harry & Meghan: A Royal Romance” in all it’s cheesy goodness. Starring Parisa Fitz-Henley as the former Suits actress (I mean, doppleganger alert!!) and Murray Fraser (although the Scottish actor is not a natural ginger) as the famed prince, it’s definitely all I imagined a royalty-themed Lifetime romance movie to be, with some, err, questionable moments of “um, did that actually happen?” cushioned around cheesy romance movie goodness, and the ultimate scene stealers of Prince George and Princess Charlotte’s adorable onscreen counterparts. 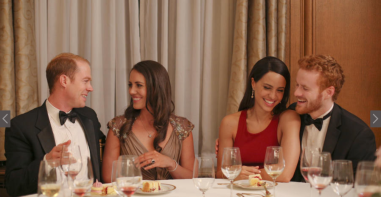 Now, sit back, relax and watch how Harry met Meghan (come on, you knew that pun was coming!) and read on for a random collection of my thoughts and musings from watching your next royal-themed guilty pleasure.

Now, that’ll keep us tied over until we can watch the Royal Wedding livestream and savor over the wedding pictures this weekend.

5 thoughts on “44 Thoughts I Had Watching Lifetime’s “Harry and Meghan: A Royal Romance””