Once again, it’s time to get bookish. By the end of June (and early July too), I was starting a new job and completely focused on getting settled, so my reading goal took a big hit. That being said, I did still manage to read 11 books (and counting) for these two summer months. So, I thought it was high-time for another Miranda’s Book Nook book update! Check out some of the summer 2021 book releases that I just can’t get enough of and should totally be on your radar when looking for the best beach reads this year. Happy reading!

I was beyond pumped to receive an ARC of Blackout by some masters of the YA game: Dhonielle Clayton, Tiffany D. Jackson, Nic Stone, Angie Thomas, Ashley Woodfolk, and Nicola Yoon. By the first few chapters, I already loved every page and each character’s story! It’s so full of heart, authenticity, representation, and adorable teen love stories.

Here, these authors came together to write an interlinked novel about Black teen love through heartwarming and charming coming-of-age stories. Each author writes a short story, focusing on one of six different love stories that all take place in New York City during a heatwave and blackout, on the same day. Each tale reads like a short story that’s compelling and adorable on its own (plus is well-written, obviously) with interconnected settings and characters to tie it all together. These are seriously adorable and cute teen love stories, plus I love to see all the representation done so accurately and relatably. Each chapter introduces a side character or background that effortlessly leads into the next story and chapter. You can clearly tell this book was meticulously organized and planned to be this interconnected which works to tie it all together so seamlessly. It’s a quick read that was hard to put down and is so engaging, well-written, and adorable. It’s a YA novel and a romance read, unlike anything I’ve read before, which is what made it so great.

This YA novel is billed as To All the Boys meets The Marvelous Mrs. Maisel meets Dumplin, which made it an automatic read for me. Yet, I only got the teen Maisel vibes located in the contemporary setting similar to TATB or Dumplin.

Here, aspiring comic Gretchen is learning to be herself as she balances school, family, first crushes, and trying her hand at stand-up comedy. While she’s always been the “least likely” girl (which I didn’t fully get here, tbh), she finds herself living out every major rom-com trope (BFF crush, makeover, bad boy love interest) which is the perfect cover for her double life trying out comedy. It seemed that this rom-com thing didn’t quite mesh with the double life/comedy thing to me.

Casting expectations aside, this was a very cute teen coming-of-age story with funny, engaging language. However, it took nearly halfway through this book to get there. I enjoyed the different chapters following a variety of classic rom-com tropes, which it was fun to see how each related to the characters and the bigger story. Plus, it’s full of well-written and authentic characters.

So, yea, it took a while to pull me in. It was slow to start, and I had struggled with getting into it and wanting to keep reading. You see, it didn’t have any real exposition and just dived right in, which (to me) felt like I was missing something as I didn’t get much (or any) true introduction to meet these characters before the story starts. I was struggling to muster enough energy to pick it up daily and was seriously debating DNFing before I even reached the halfway point of my galley copy. I’m glad I did stick with it because the story does pick up soon after that and it gets funnier and more engaging. So, if you can stick with this read, you’ll end up smiling over its absolutely precious rom-com-worthy ending.

As the massive Anglophile that I am, I needed this book no matter how short or picture-heavy it would end up being. Based on, and curated by the creators of the Instagram page of the same time, this nonfiction read provides a seasonal guide to the UK city’s most Instagrammable sites, the blog/IG page history, and plenty of advice to take the best Insta snaps.

There’s helpful text and gorgeous pics that make this read so fun and gives me so much wanderlust! (Gosh, I miss London!!) It reads like a friend giving off travel advice for little-known places you have to visit in order to up your IG game. With such gorge snapshots inside and on the cover, this book would make a perfect coffee table book for your living room. Facts.

This book advises you on the best places to visit by seasons, and the best ones to see, what to know or order, and why it’s so ‘grammable. It’s so much fun and gives me serious wanderlust while reading about the best hidden gems to check out. Plus, the IG-worthy snaps are breathtaking and only add to my wanderlust. You’ll read about various categories of places, from hotels, restaurants, day trips, cafes, and more. It also gives helpful maps and nearby tube stations.

I only wish I had this guidebook before I last went to London, oh well, there’s always next time…

So We Meet Again by Suzanne Park

After I devoured the author’s latest YA novel (Sunny Song), I was pumped to learn about her newest contemporary romance story. And let me tell you, it’s fun and lighthearted, making it perfect for your summer beach bags!

Here, we begin with investment banker Jessie as she’s laid off from her boys-club Wall Street firm in a virtual meeting. After packing up and moving home to Nashville with her parents, she has no idea what to do with her life. She decides to reboot her old Korean cooking YouTube channel with fresh hacks and meal prep tips, and it’s actually quite well-received. All the while, she runs into her childhood nemesis and all-around golden boy Daniel who helps her launch her new business venture and even perhaps opens her heart along the way.

In this romance novel, there’s plenty of banter and wit between leads Jessie and Daniel, and a boatload of chemistry to boot. It’s very fun, engaging, and quick to read. The romance is very very very very slow-burn, so much so that Daniel is barely in half the book which makes this more of a coming-of-age women’s fiction novel rather than a straight-up romance book. Nonetheless, it’s very cute and I’d like a post-epilogue HEA update, like, now please, thank you. 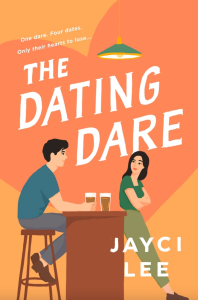 The Dating Dare by Jayci Lee

Set in the same world as the author’s first novel (A Sweet Mess), now it’s Aubrey’s best friend’s and Landon’s little brother’s turn to find love. Tara Park has one rule when it comes to dating: nothing serious. Between her past heartbreak and a laser-focus on the family’s brewery, there’s no way she could even entertain the idea of dating.

When Landon’s brother Seth waltzes into town, he’s a massive temptation to her and she may be willing to bend her rules for a few dates with the well-known fashion photographer. Seth is only in town for a month because he’s moving to Paris soon after. While he’s in town, he challenges Tara to a four-date no-strings-attached dating “dare” that could be a nice distraction for them both. But the more he sees of her, the less willing he is to let her go when the dare’s over.

As I read the dual-perspective book, I found it had banter and spades that had me hooked. It’s an easy, quick romance read that you can polish off in a day. The romance is cute, the characters are dynamic, and all that leads to a cute and fun romance read. 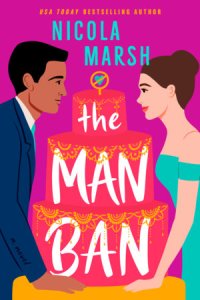 The Man Ban by Nicola Marsh

I was very excited to start this read, looking forwards to a fun enemies to lovers novel, and this read delivered on that front. Here, Harper has been on a self-appointed “man ban” for a year after a really bad breakup, and instead, focuses on her growing career as a food stylist.
Her latest gig is styling dishes at her best friend’s traditional Indian wedding, where she meets the best man Manny who belittles her work the entire night. In retaliation, she decides she’ll lead him on during the event so she can later humiliate him. Well, things don’t always go as planned. Manny (as seen in the author’s The Boy Toy) is a handsome Anglo-Indian doctor who immediately feels an inimitable pull towards Harper.
One week later, he shows up at the same New Zealand resort where she’s working on her next job. After a work catastrophe, he offers to help her and she notes his chivalry has gotten under her skin. She’s ready to lift her “man ban” for a vacation fling. He agrees, after all, he’s not looking to get married despite his grandmother’s dying wish for him to do so. Yet, he can’t help but fall under Harper’s spell. Told in dual perspectives, this enemies to lovers novel is full of compelling language that draws me in, plus so much freaking banter that makes me fall for this read even quicker.

This book isn’t my usual happy-go-lucky YA or romance read, but nonetheless, its vibe intrigued me to try it out. Here, married couple Rebecca and Mickey move from their teeny Queens apartment and freelance gigs to Palm Beach, Florida (hence the title) with their young son when Mickey gets a job as the estate manager for a multimillionaire. As he works to manage the household of this influential businessman, Mickey soon gets a job offer to work in the same role for a more powerful businessman, making even more money. At the same time, freelance journalist Rebecca gets the chance to ghostwrite Mickey’s boss’ wife’s memoirs (that’s right, plural). As a wealth inequality writer, this is Rebecca’s chance to peek inside this incredibly wealthy world. As time goes on, Mickey and Rebecca become more reliant and dependant on money and their bosses’ help until a big secret could topple everything.

This literary fiction novel captures the divide between the haves and the have nots in the wealthy enclave of Palm Beach. From the start, it has such engaging language and strong storytelling that pulls me in and compels me to keep reading. Then, the big twist reveal gets soooo juicy and I just *have* to keep reading. However, there’s a ton of exposition and background that feels a touch too long in certsin parts. But overall, it’s compelling and intriguing.

Advance reader copies of the books listed were provided by NetGalley in exchange for an honest review.